We finished the wall siding this weekend, and mostly finished up the bay window framing. As soon as the sheeting was up, it was much easier to visualize the space, and you can start to feel the size better. The house seems massively tall standing in the driveway (which had me freaking out a little bit thinking about transport), but inside it feels just right. We also installed the Simpson Strong-Ties with our cool little no-weld brackets, and they work great! Although we did discover that the location of the cross-members NEVER coincides with the 16″ o.c. studs (which line up with our 48″ wide sheeting), of course. So if you are designing your own house and you really have it together, maybe you could get the builder to weld the cross-members every 16″. And to build according to code, the strong ties should be nailed to doubled studs, which are not located beneath a window. So we had to add a whole lot more studs than we would have liked. We had to skip one due to the French doors, so only 7 were installed.

We also “screwed and glued” our sheets to the framing, to give added shear strength. Since the Hi-Omega Epoxy STILL hasn’t arrived (in fact, it had not even been shipped) we bought some glue called Eco-Bond Heavy Duty Adhesive in 12 oz tubes, and that stuff works great! You can special order it through Big Box Stores, and it is zero VOC, non-petroleum based, and has almost no odor. In fact, I accidentally got some on my hands and found that I could detect no odors until I had it 1″ from my nose, and even then, it was faint. No headaches for me! And it is 1/4 as expensive as the above special glue. 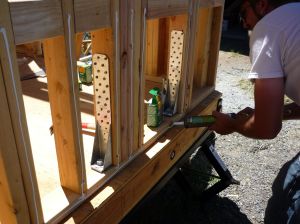 The other thing we spent a lot of time doing this weekend was stripping the many layers of lead and latex paint off of our antique windows, to get down to the beautiful vertical grain fir that was standard for windows back in the day. We used CitriStrip (available at Big Box Stores) and it works well… to strip one layer off at a time. Next weekend we will sand the windows and apply sealant. No pictures, as it was pretty boring to look at.

The Furry Assistant mostly chilled out. Here she is, napping on the couch in the shade. Lucky dog!

Not all who wander are lost.

Construction of a mythical tiny house

Chronicling the unfurling of a beautiful little house.

Construction of a mythical tiny house

Creating "new" from old, building and living in a tiny "reclaimed" house. Beginning in 2012, I will live in this 216 square foot space as I pursue my PhD studies in Literature and the Environment. In this way, I hope to live a little smaller, leave a little lighter, and learn in what ways formal study can be acted in the every day.

A blog for Turning Around America

And the Timber Frame Tiny House